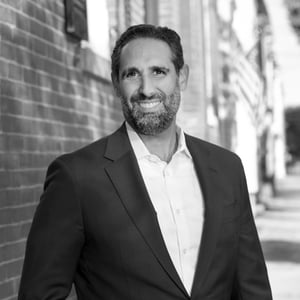 A partner at Baretz+Brunelle, Jeff Berardi focuses on leading growth and profitability initiatives for a wide range of clients in the legal industry, including elite law firms, legal technology companies and consulting firms. Jeff brings more than 20 years of experience in marketing and business development strategy, having held prior roles as chief marketing officer at global law firm K&L Gates, and chief marketing & communications officer at global management consulting firm Ankura. Most recently, Jeff founded and managed his own successful consulting practice, which merged with B+B in October 2021.

Jeff spent 15 years at K&L Gates, an international corporate law firm with 45 offices on five continents. During his long tenure as CMO, he was responsible for managing marketing, business development and sales, and leading a team of more than 100 professionals. As just one example of his impact, Jeff personally directed the launch of the K&L Gates brand in 2007, which quickly grew to become a top 20 global law firm brand under Jeff’s oversight. In his role at Ankura, a firm that was recognized as one of the five fastest growing consulting companies in Consulting Magazine, Jeff was responsible for overseeing a global team of marketing professionals who supported the firm’s operations in its offices around the world.

A regular speaker at industry conferences, Jeff has been interviewed by various prominent publications and has contributed chapters to the “Inside the Minds” series published by Thomson Reuters. In 2011, Jeff was named the international “Marketing Professional of the Year” at the Hildebrandt Institute’s 18th Annual Marketing Partner Forum, an award recognizing the most innovative marketing professionals. In addition, he has served as a Seven Generations board member for the international nonprofit organization, City Year and in an advisory capacity for the Legal Marketing Association and the Professional Services Growth Alliance. Jeff is a graduate of Boston College and received his MBA from the Simon Business School at the University of Rochester.